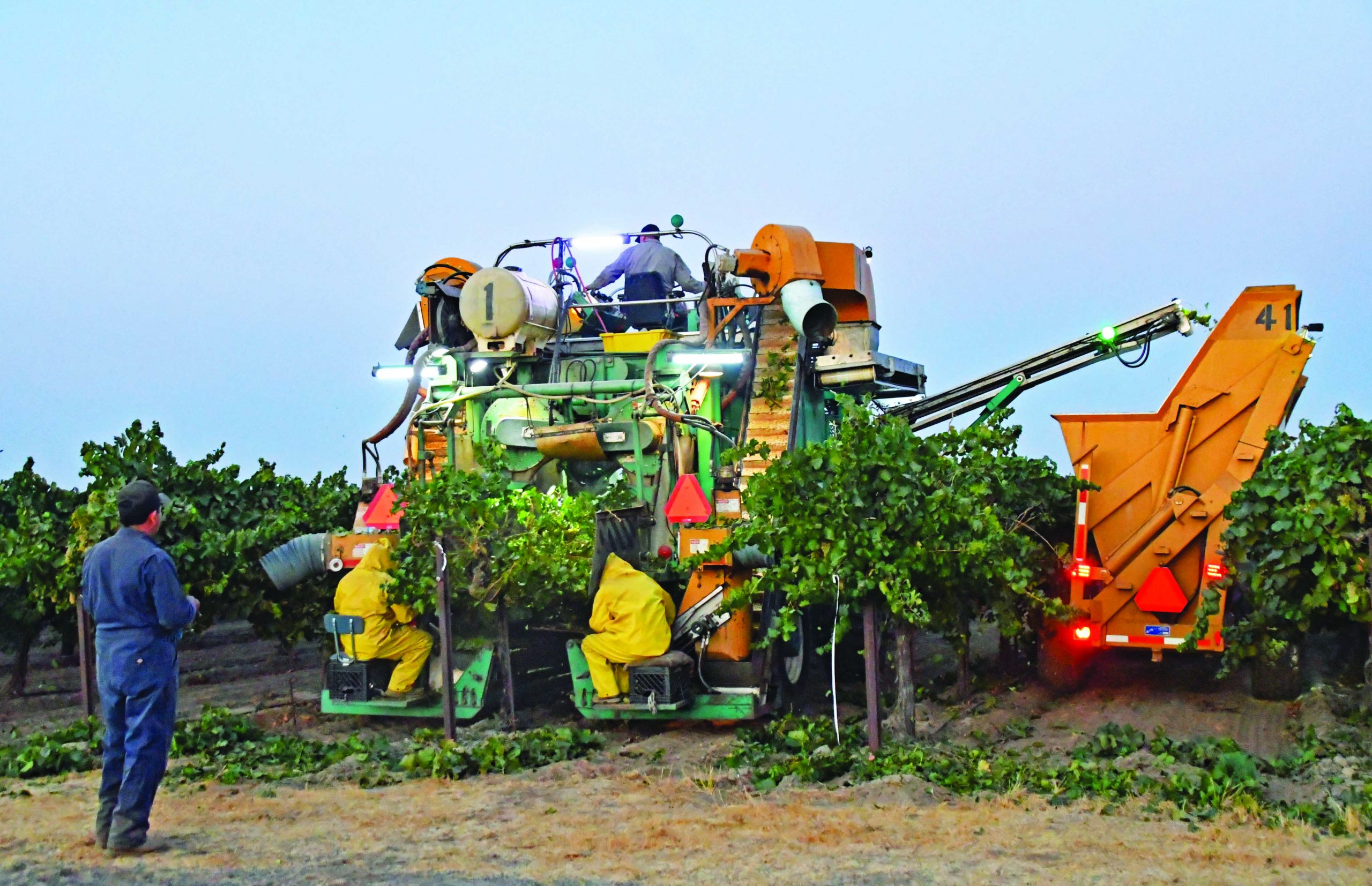 Besides COVID and water issues, San Joaquin County’s wineries have been dealing with a labor shortage throughout 2020 and 2021.

“The labor shortage of qualified workers is industry-wide and the wine sector was affected across the industry,” said San Joaquin Farm Bureau President David Strecker. “The shortage of people for general ag work, especially at harvest, had growers worried.”

Labor shortages weren’t confined to the vineyards, orchards or fields; equipment and truck drivers were hard to find and this slowed harvests and the movement of product from vineyards to wineries and from orchards and fields to processors.

Was there enough labor for winegrapes? “No. Absolutely not,” said Aaron Lange, vice president vineyard operations for LangeTwins Family Winery and Vineyards. This was despite the LangeTwins operation starting recruiting early, raising wages to attract tractor drivers and general harvest labor positions.

“We had converted 80% of our harvesting equipment with MOG to take care of Material Other than Grapes like leaves, sticks and other debris. thereby reducing our harvest labor needs by two people per machine. But we were still short by a few people every week.”

Recruiting haulers was frustrating, Lange said. “We’ve been recruiting since July and we’ve only filled one of the three grape hauling positions even with significant wage increases and incentives.”

“Labor is a total mess on multiple fronts,” said Kevin Phillips, vice president of operations for Jahant Vineyards and Michael David Winery, Wine Enthusiast’s 2020 American Winery of the Year. “Trucking, machine operators, temporary labor, etc. Nobody wants to go back to work when they can do very well staying home receiving generous unemployment checks due to COVID layoffs.”

“This difficult labor situation again makes it clear that we need a guest worker program,” said SJFB Executive Director Bruce Blodgett. “But the federal governments is not moving toward an obvious solution. So the worker shortages continue beginning with cherries and extending into grapes and other comments.”

Adding to the problem of labor shortages was the government’s program of increased unemployment payments that paid out-of- work people more than they would have made by returning to their jobs.

Nature doesn’t consider the aspects of the labor needs of agriculture, according to Spencer. “The pinch occurred with the simultaneous ripening in vineyards as sugars really jumped on early and late varieties at the same time, putting pressure on growers. Also, there were some disruptions due to the Delta varient wave that arrived.”

The “why” of a dearth of workers arises from a number of factors including unemployment benefits keeping people home, schools closing requiring that parents stay home, according the Spencer, and, he said, “I’ve heard of some wineries having trouble with hiring cellar workers.”

The hospitality realm among wineries offering tasting and restaurant food requires people with excellent personalities, Spencer said, “and if necessary they need to be taught about wines.” The time required to create knowledgeable sommeliers, waiters, waitresses and kitchen help depends on what skills the prospective workers bring to the workplace.

“Employers face the prospect of the minimum wage increasing and work hours being defined,” he said. “Add to all this, the challenge of wineries maintaining their supply chain and the resulting increasing expenses that will be passed along to the consumer. How they will react to all of this is crucial.”

Marketing the various changes brought by labor that boost prices by means that are unseen by wine purchasers will probably be required to ease the pain of higher prices.

“I think the labor situation’s getting worse across the board with a trend that began with cherries when finding experienced pickers became harder,” said SJFB Second Vice President Joe Ferrari. “There just aren’t that many people available who are good at it.”

“Going back to cherries, labor has been a challenge,” said SJFB First Vice President Andrew Watkins. “And that challenge will continue for winegrapes and other labor intensive crops.”

Watkins agreed with the idea that the Delta variant of COVID could be keeping potential workers home with the unemployment benefits contributing to the job market malaise. “But those extravagant payments have ended so we’ll find out how the labor situation will change.”

In this time of drought affecting nearly all crops grown in the state and San Joaquin County, when combined with the lack of workers, things can get rough for some, if not all, crops, according to Bryan Little, Farm Employers Labor Service [FELS] CEO and CFBF director of labor affairs.

“I know of farmers foregoing leaf thinning and other activities growers would normally do because they don’t have sufficient workers,” explained Little. “Employers are struggling with how to cope with the new minimum wage and working and overtime hours. They have to be careful about paying overtime.”

These and other issues are being addressed by FELS webinars.

Little added, “What’s really tough about COVID 19 is coping with all the areas it’s affected in conjunction with a farmer’s employees.”

No one, he said, is immune from having problems across the agricultural spectrum, wineries included. In the pre-pandemic and extravagant unemployment benefits era, an average of 1½ people applied for every job. That’s not the case today. “I’ve been told by growers they’re 30% to 40% short of crews. Some crops weren’t harvested due to not enough labor being available and then it’s too late and the crop is un-harvestable, so it is more economically feasible to just disc it under or not harvest it at all.”

Mechanization may be on the rise but until the machines can take over completely and do the work as well as humans, workers will still be needed to get the job done…the right way.