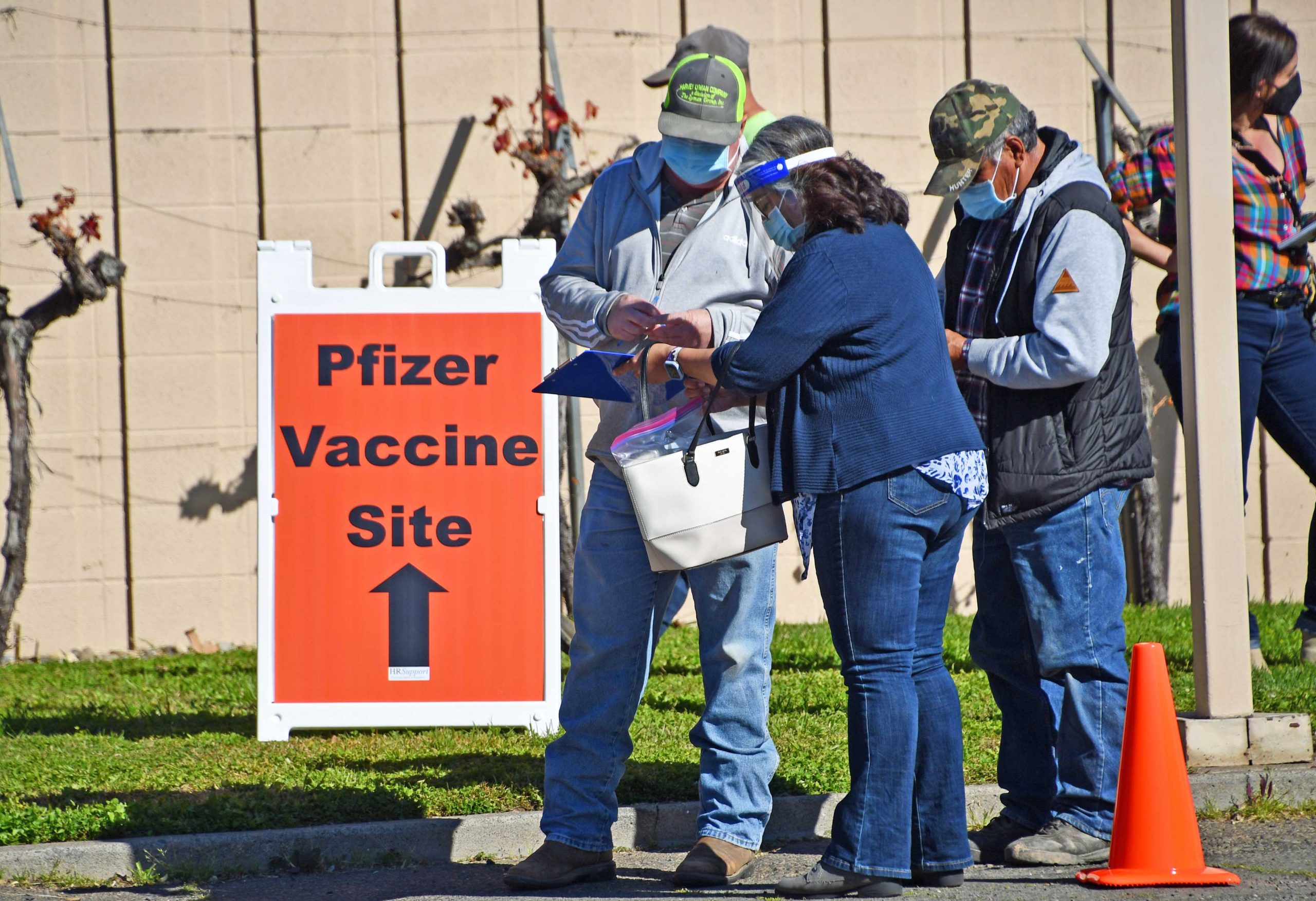 Although San Joaquin County held its first vaccination clinic for essential agricultural workers recently at the Lodi Grape Festival Grounds, industry leaders say they remain frustrated at the slow pace and advocated for more events. With cherry harvest beginning in late April, they say time is of the essence.

“It’s important for there to be an opportunity for the people who want vaccines to be given to them as soon as possible,” said San Joaquin Farm Bureau President David Strecker. “It seems that we’re not being given the answers we need. We’re being told they’re being made available faster, but it just seems things are getting longer and longer and further out as things progress. You keep hearing that more and more people are getting the vaccine, but people at risk should be taken care of.”

“We’re behind the rest of the state as far as allocation,” he said.

The Lodi clinic was hastily put together, with limited details even days before the event. It was expected to serve about 500 ag workers.

Dave Simpson, a Lodi-area winegrape grower and SJFB board member, jumped at the chance to be vaccinated at the Lodi festival grounds. He had tried to get one when the county was vaccinating veterans at the Cabral Ag Center earlier this year. But they were only taking veterans, which ruled out Simpson’s wife, Sandy. She also was able to obtain an appointment at the Lodi event, although not at the same time slot as Dave.

As residents over 65 years old, the Simpsons had also tried unsuccessfully to obtain the vaccine through their healthcare provider.

Ronni Natera, human resources director for Lodi-based Vino Farms, had been pushing for such a clinic for the past few weeks so interested ag workers could be vaccinated. When she heard about the Lodi event, she didn’t wait.

“It moves very quickly, and it’s usually from one day to the next,” Natera said.

Of the 27 employees at the farm’s Lodi operation who were eligible based on age criteria, 24 received the vaccine.

Vino Farms doesn’t require employees be vaccinated, Natera said. But if they are interested, company HR representatives will help them fill out the necessary forms and schedule appointments.

“We don’t see it as a direct benefit to Vino Farms – we’re seeing it as an overall benefit to the general health of the community,” she said.

Blodgett said he received calls from several large packing facilities interested in getting workers vaccinated at the Lodi event. Altogether, they had thousands of employees, but he had to tell them participation was limited because of a lack of vaccine availability.

“I think a lot of people are really frustrated,” Blodgett said. “The clock is ticking and it will be April before we really get into (vaccination), and April isn’t that far away.”

San Joaquin County Supervisor Chuck Winn has been advocating for multiple vaccination clinics for essential food and ag workers because of the roles they play in growing, processing and distributing food.

“It’s very important to understand that if we can get them in one place and get them vaccinated and back to work, it will be to everybody’s advantage,” he said. “The public at large depends entirely on these food resources. I would hope this will be the first of many (clinics), but the real key is availability of doses.”

Blodgett also wondered how the county will address the migratory harvest crews who pick cherries for six to eight weeks locally, then move north to work the Oregon and Washington cherry crops.

“How are we going to vaccinate them twice since they’re moving with the harvest?” Blodgett said.

“Just look back to a year ago what happened in some of the processing facilities,” he said. “We’re going to be in the same situation if we don’t get something done. I think here the biggest issue is the lack of available vaccines.”

Although Pelican said he’s doing everything he can from his office, vaccine coordination and distribution is being handled by the county Office of Emergency Services.

Through the SJFB’s Friday Review e-newsletter, Pelican is surveying Farm Bureau members about their interest in COVID vaccinations. The survey also is designed to understand how large the need is within the ag industry and identify possible locations for vaccine clinics.

“I don’t think it’s a lack of places to have vaccine events take place, but if you don’t have the vaccine, it’s kind of a moot point,” Pelican said. “It’s unfortunate. I’ve been told they’re planning on starting. I just think it’s a matter of getting the vaccine out.”

More than 300 Farm Bureau members from different farm settings have already responded to Pelican’s survey, said Daniel Kim with San Joaquin County Public Health Services “They’ve all indicated they would be willing to host (a clinic) or indicated they would be interested in getting a vaccine,” he said, adding the information was forwarded to OES.

“They’re looking at it as more of an age-based criteria, so it may be necessary to target those 65 and over or who have chronic health conditions rather than a blanket approach,” Kim said. “With the supply being so low, it poses a problem trying to roll it out quickly. We’re not at a stage yet where we can open it up to enough people.”

During the week of Feb. 15, for example, the county received just 6,125 vaccines, Winn said, adding they won’t go very far considering the county has more than 100,000 residents 65 years and older.

Complicating matters was the change in eligibility criteria for those who followed healthcare workers and residents of skilled and assisted-living facilities under Phase 1A. Initially, essential frontline food and ag workers, teachers and childcare providers, and emergency services employees were alongside those 65 and older under Phase 1B Tier 1.

But in early February, Gov. Gavin Newsom announced an age-based priority system he said would simplify and speed vaccine roll-out. Essentially, the revisions pushed food and ag workers who weren’t 65 years old, along with teachers, childcare workers and emergency services employees, down the priority list.

Then in late February, Newsom pledged 10% of all vaccines would be reserved for teachers and school employees who interact with others, creating further confusion.

At the same time, San Joaquin County has to hold back some vaccines for second doses, since both the Pfizer and Moderna vaccines need two doses administered three and four weeks apart, respectively.

As of Feb. 19, a total of 96,031 vaccines had been administered to San Joaquin County residents, according to the state’s COVID-19 website.

Vaccines within San Joaquin County come through different distribution channels. The federal government sends them directly to hospitals, such as Sutter Health and Kaiser Permanente, to administer to their employees and patients. More recently, the federal government has contracted with Walgreens and CVS to administer a separate order of vaccines to residents of long-term care facilities.

In addition, the government sends vaccines to the California Department of Health Services, which then ships them to the counties. Within San Joaquin County, OES distributes them to about 40 approved vaccinators, such as Save Mart Supermarkets, Safeway and San Joaquin County Clinics.

Blue Shield – the third largest health insurer in California – was scheduled to take over vaccine distribution from the state DHS beginning in late February, with Kaiser Permanente joining soon after.

Initially 10 counties in the interior, including San Joaquin, will make the transition. How the changeover will affect county vaccine availability is unknown, Kim said.

Winn has been in several recent meetings with the state and Blue Shield. Even after reading the 50-plus-page contract, he said he has a number of questions that remain unanswered, including what appears to be a lack of local control by counties.