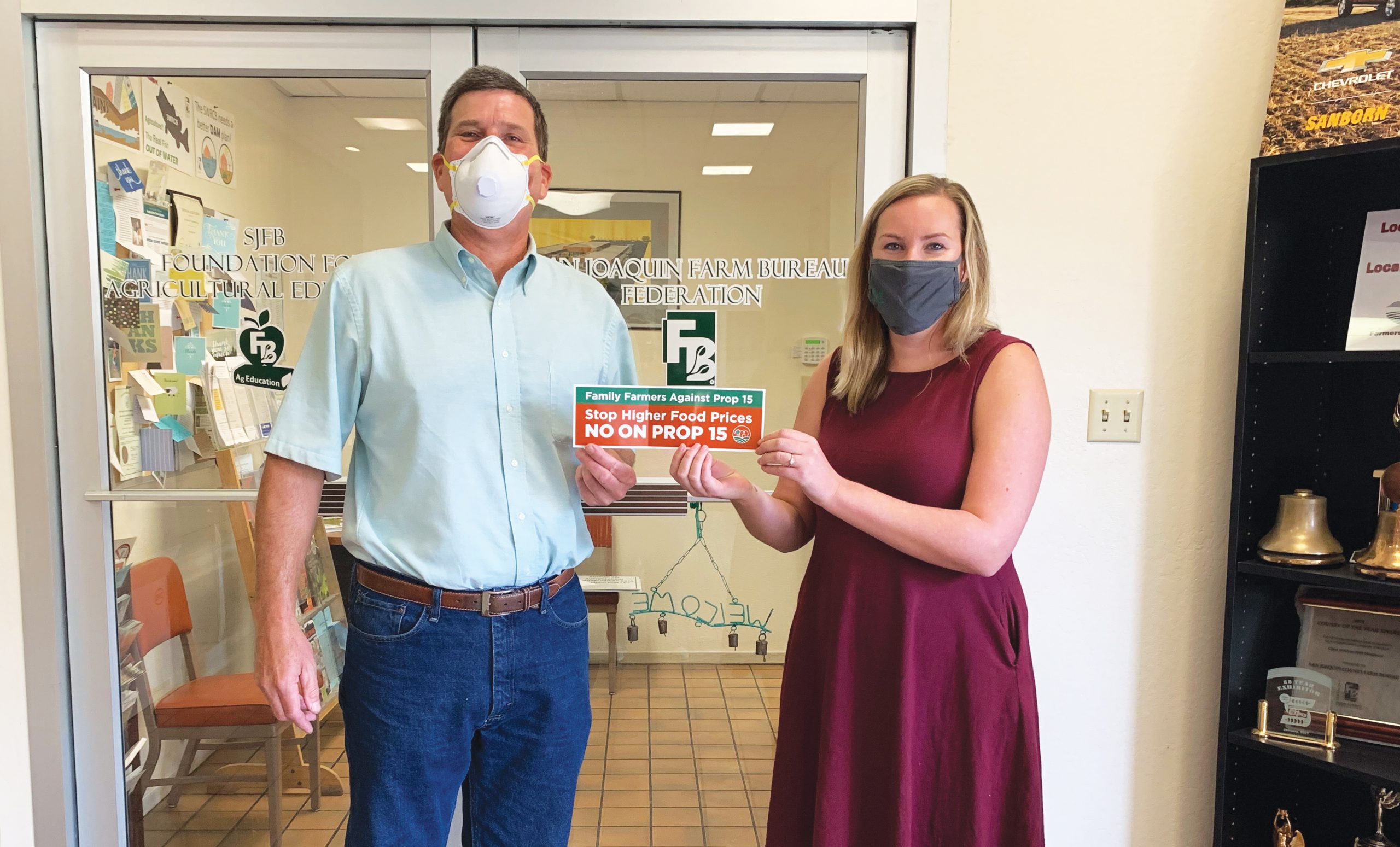 The average California farmer or rancher paid $17,299 in property taxes in 2017, the highest average of any state that year, according to the 2017 Census of Agriculture. The tax burden for producers in San Joaquin County and elsewhere in the state could shoot even higher if voters in November pass Proposition 15, described as the state’s largest proposed property tax increase in history.

San Joaquin Farm Bureau First Vice President Ken Vogel, who grows cherries and walnuts near Linden, said now is not the time to propose new taxes when agriculture and businesses in general are struggling to survive.

“It will have a huge impact and not just on ag,” he said. “Taxes are not the answer. With Sacramento, it’s just spend more. The answer to everything is just spend more, and that’s not going to help our community. If you tax businesses and it kills them, it doesn’t actually help things over time.”

Citing the recent “Crop Report Plus,” SJFB Second Vice President Jake Samuel said the impacts of the county ag industry go far beyond the farm, contributing more than $5.7 billion to the county in 2018. More than $3.9 billion came from direct impacts, but agriculture yielded another $1.7 billion in multiplier effects. The industry also was responsible for more than 33,000 jobs.

All of those components could be seriously injured financially by higher property taxes from Prop 15.

“It’s not like ag is going to go away, but it’s going to make it that much harder to be sustainable for the environment, for people and for your production while trying to return some profit,” said Samuel, who grows cherries and walnuts with his brothers and father near Linden. “It’s not sustainable. I think people are starting to realize that and are saying (this proposition) isn’t a good thing.”

SJFB board member Paul Sanguinetti, who farms row crops and walnuts near Stockton, said higher property taxes also could have a wide-ranging impact on the county’s general economy.

“If they raise (property) taxes, a lot of businesses will move, but I can’t move,” he said. “I’m staying here. Pretty soon, I won’t be spending as much either, so all of those people I deal with they’re getting less money but their taxes all went up. It’s a ripple down effect when all of these industries have to pay more taxes.”

As a farmer, Sanguinetti is a price taker and can’t raise the sales price of his walnuts or row crops just because he has higher expenses or higher property taxes.

“They want to charge me more for taxes – who do I charge to get the money? I can’t,” he said.

Sanguinetti said numerous county businesses already are suffering from the economic downturn caused by the coronavirus pandemic. And Prop. 15 would deal the death blow to many of those.

“We’re going to lose a lot of businesses (because of the pandemic), and a lot of these people aren’t going to come back,” he said. “It’s not a good situation. This is a really bad proposition for us and for any kind of business – not just ag.”

During a recent drive on Jack Tone Road, Vogel said he noticed a number of orchards and vineyards that had been removed.

“This shows they’re hurting right now, and this (proposition) will just be a nail in the coffin that we can’t overcome,” he said. “Walnut prices are down, and cherries aren’t doing well. A lot of farms around here are permanent crops, and it’s very difficult to change from one crop to another.”

In San Joaquin County, agricultural, business and commercial property owners would pay more than $154 million annually in additional property taxes because of new reassessments, according to figures from Prop. 15 supporters.

On top of back-breaking property tax increases, Prop. 15 also could stress county assessor’s offices by requiring them to reassess all commercial properties within three years of the measure’s passage. Statewide, the California Assessors’ Association estimates the measure would cost more than $1 billion over three years to implement. The association has gone on record as opposing Prop. 15.

In addition, the assessors’ offices would incur huge costs before they receive reimbursement from the state.

“I think it’s going to be a nightmare for the counties, because they don’t have the staff,” said Sanguinetti, also California Farm Bureau District 12 board member.

Referred to as the “split-roll tax initiative,” Prop. 15 would remove protections that Prop. 13 has provided commercial and industrial property owners – including farmers and ranchers – since voters passed the measure in 1978.

As written, Prop. 13 limits total taxes to 1.1% of a property’s value when it is purchased and limits tax increases to 2% annually. A property is not reassessed until sold.

Prop. 15 would remove protection for commercial and industrial properties worth more than $3 million. It also would redefine commercial and industrial structures subject to reassessment to include barns, food processors, packinghouses, dairy milking parlors and other buildings used in food and fiber production. Improvements, such as drainage or irrigation systems, solar panels and dairy manure digesters, also would be reassessed – something that has Sanguinetti concerned.

“Everything just about is classified as an improvement under this proposition, so they can do a big job of raising my taxes a lot,” he said.

Although agricultural land would still be protected by Prop. 13, mature trees and vines planted on that ground would not. Sanguinetti’s mature walnut orchard, for example, would have to be reassessed as would his orchard irrigation system under the ballot measure.

Residential properties would remain protected under Prop. 13, but proponents are expected to come back and address those in a future measure.

Initiative supporters, who have nicknamed the measure the “Schools and Communities First Initiative,” point to the $8 billion to $12.5 billion annually that is expected to be generated by reassessments. They say the additional funds would go toward schools and communities, but the ballot measure does not restrict where the money is spent.

The misleading title worries Sanguinetti, who pointed to several past measures that have claimed to benefit schools.

Vogel agreed, citing 2014 Prop. 47 in November 2014, which was dubbed the “Safe Neighborhood and Schools Act.” From the title, he said one might expect the ballot measure to benefit schools. Instead, it released up to 30,000 incarcerated individuals into the public annually by reclassifying some drug possession and property crimes from felonies to misdemeanors.