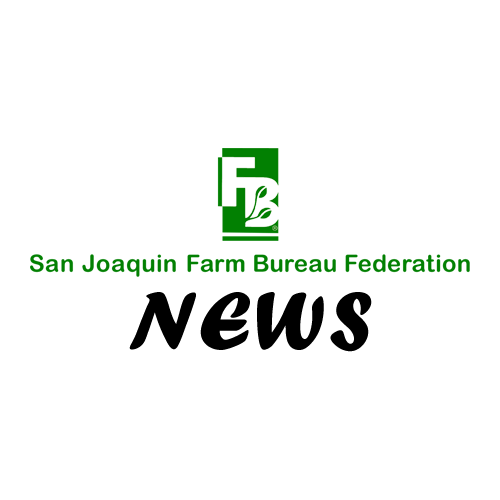 March of 2020 may not have hit the March Miracle level as far as rain was concerned but it was good enough to elicit optimism and enthusiasm from growers and water districts in the county.

“[The rain] helps keep the pumps off,” said SJFB Executive Director Bruce Blodgett. “It’s welcome and we’re thankful for whatever rain we can get, just so it doesn’t mess with the cherry bloom.”

He said some growers had begun irrigating and the rain arrived to take over the irrigating.

“We had a forecast for a current storm that looked good but it was downgraded,” he said. “We’ll see how it goes.”
This comes after a dry January and little rain in February that conjured concerns that drought times were on the way but March rainfall helped deter drought angst.

Vogel pleased
SJFB First Vice President Ken Vogel, a walnut and cherry grower in the Linden area, said he was “pleased to see the rain. It didn’t really hurt our cherries” and his orchards in Farmington were dryer than those at the junction of Copperopolis and Duncan Roads which were markedly wetter, he said.

“The bees were busy and finished their work and while the rain interfered with some projects and crops, I’ll take the rain,” Vogel said, adding that it will probably slow walnut spraying and some field work, in his case some tree removal and plantings.

Snow runoff good
The March rain is “Good, much better than last month,” according to Brandon Nakagawa, water resource coordinator for South San Joaquin Irrigation District. “There has also been an uptick in actual and projected runoff.” The projected runoff is based on snow and its water content.

“We’ve had 1½ inches in some places and two-inches in others,” he said, noting that “The Stanislaus watershed had good rain. We’re not out of the drought situation yet but it’s looking like we’re moving in the right direction.”

Watersheds benefit
The good news for Dave Simpson, SJFB Water Committee chair and North San Joaquin Water Conservation District board member who farms winegrapes near Lodi, came with a good amount of rain in the Mokelumne and Calaveras watersheds, with more water coming in from below Camanche Dam.

“It’s better than nothing, it’s been a good thing,” he said, adding, “It’s a godsend for us in irrigated ag.” “I feel for cattlemen,” Simpson said. “This rain was probably too late for many of them whose range was parched. Overall, though, we’ll take what we can get, waterwise.”

Simpson is bedeviled by the East Bay Municipal Utilities District that refuses to deliver seasonal water allotments to the conservation district. “It’s been two years and we’ve been unable to deliver a drop of water. I’ve developed a jaded perspective on this.”

Almonds fare well
With almonds the county’s No. 1 crop – more than $536 million in 2018 – Dave Phippen, almond grower and partner in Travaille & Phippen in Ripon, said, “I’m tickled pink to have this rain falling. We had ample warning of the rain which allowed us to get the sprayers out to get protection on the trees.”

Important work can be done during breaks in the weather and, Phippen said, the industry’s PCA’s helped almond growers select from “a big list of fungicides that we can use” and that “applications are made very carefully to keep bees safe, including spraying at night and turning off sprayers near hives” all done between rain storms.

What-ifs
“It’s a Catch-22 situation with cherries,” explained SJFB Second Vice President Jake Samuel. “We definitely need the moisture we’ve received in amounts of from 1½ inches here and two inches there and it’s too early to tell how it’s affected the cherry crop, if at all.”

He said the snow pack was improved by the March storms but many “what-ifs” remain, issues that include labor for cherries and other labor intensive crops. “Ag workers have been approved for entry into the U.S. Those intended for cherries are approved but this hasn’t been an exempt year for those workers picking pears.”

Samuel said many farmers were able to turn off their irrigation pumps, which saved some money and he said the moisture helped some disking. “Ag is active in many sector and the rain helped.”

He said the March rains added 12,000 acre-feet to New Hogan Reservoir and “approximately the same to New Melones.” Good news for the agriculture and the municipal sectors serviced by Stockton East Water District.

It appears that the Ides of March have been supplanted, at least in San Joaquin County, by a new type of March Madness, in this case welcome rain.