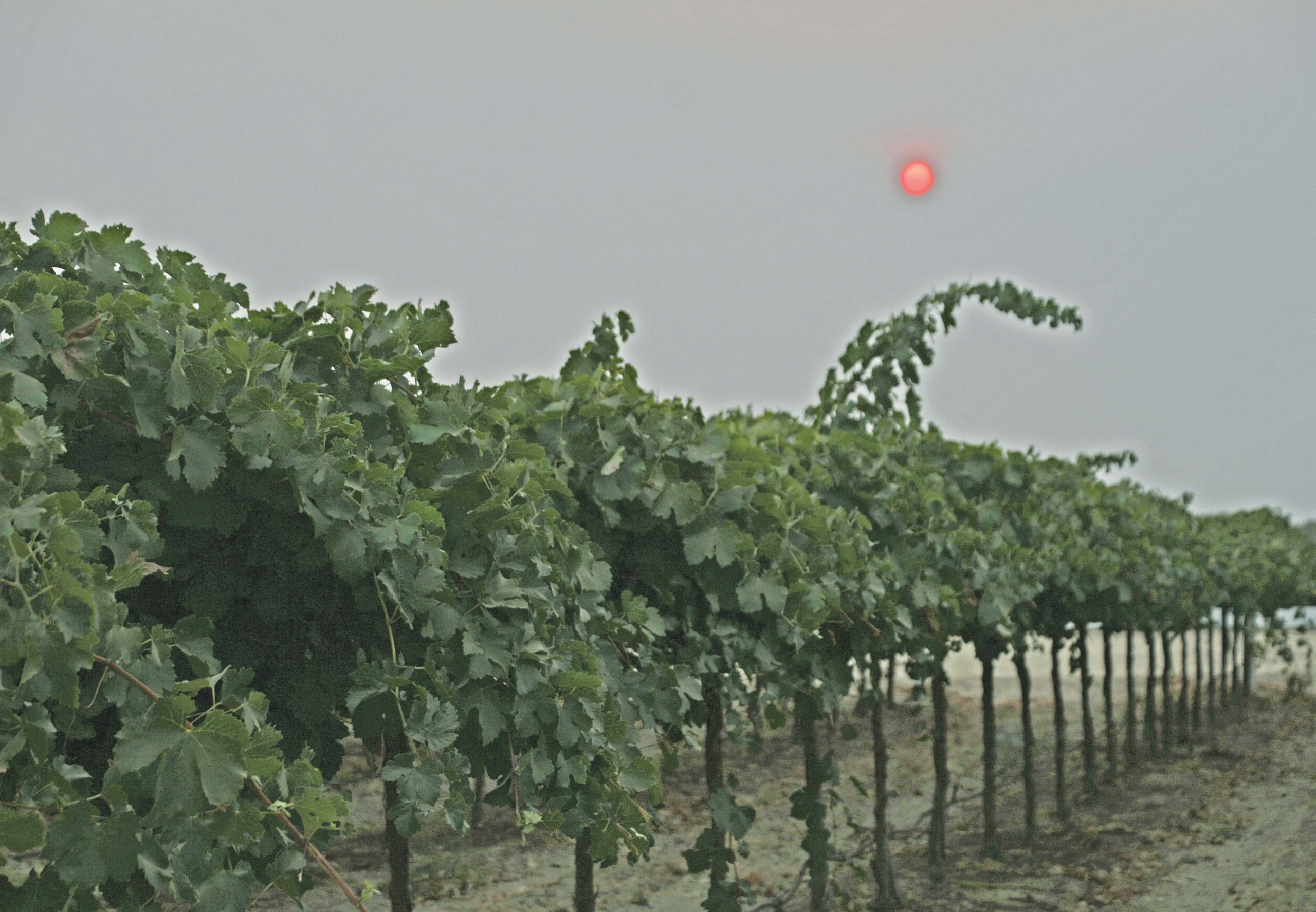 “Grape premium rates are determined by county, and it appears the rates could go down when announced in the fall based on the historical performance of the program in San Joaquin County,” said Jeff Yasui, Risk Management Agency regional director for California, Hawaii, Arizona, Nevada and Utah.

Dave Simpson, who grows winegrapes near Lodi, said he looks at crop insurance as an economical risk management tool. In his 30 or so years farming, he’s probably broken even on the premiums he’s paid compared to his claims.

Simpson said he has only to look to his Tokay table grapes in 1984, when a 112-degree heat snap in June “literally turned all of those grapes into raisins, and they had no value. We went through and picked them at harvest and I might have made $300 per acre. They were supposed to be table grapes.”

Another time, hail struck at sunset, resulting in freeze damage overnight to the tissue where the spurs push from the vines. The winegrape spurs, which eventually produce the current year’s crop, broke off after the first strong wind.

“I guess my concern is I just don’t want to run around trying to borrow money trying to recover from a catastrophic failure,” Simpson said.

Even last year, potential crop damage was on his mind as smoke filled the skies at harvest.

“The day they let me pick grapes, I got in there and picked cabernet,” he said. “I was afraid there would be a problem (with smoke taint).”

Fortunately for Simpson, his grapes were not affected.

Bruce Fry, who grows winegrapes with his father, Jerry, near Lodi, also has had crop insurance for a long time. Last season, they filed an insurance claim because a winery rejected their grapes for smoke and another claim for loss of grape production.

With harvest of their early white varieties just getting underway in mid-August, Fry said he remained concerned about smoke-filled skies.

“It’s a concern every year – it’s where we live,” he said. “It’s just part of the business you have to deal with.”

Over the years, he and his father have figured how much risk they’re willing to take with each variety and have settled on the appropriate crop insurance coverage levels.

One thing unique to winegrapes is the end product – wine – reflects the season in which they’re grown, Fry said.

“That’s what’s cool about grapes,” he said. “They tell the story of the year – if it’s a hot year, a rainy year, a cool year or a smoky year. You have to deal with what Mother Nature dealt you and sell it to the consumer.”

SJ County has had fewer losses

Statewide, winegrape crop insurance paid $268 million in indemnities in 2020, with about 85% of that for fire- and smoke-related losses, according to RMA figures. The largest recipients were Napa County growers, who received $91.8 million, and Sonoma County growers, with $80.2 million in payments

The actual premium paid by growers over the time period was only $20 million because, on average, 61% of it was subsidized, Yasui said.

In San Joaquin County, 473 policies covering 51,206 acres of winegrapes were written this season representing $141 million of liability. That compares to statewide liabilities of $1.74 billion. Napa, Sonoma and Fresno counties had the largest liabilities.

The federal agency is expected to announce 2022 crop insurance rates in October, and California producers historically have had until Jan. 31, 2022, to sign up.

Premiums were the same in 2021 as they were in 2020, but 2020 saw higher wildfire-related losses statewide than in 2019. Spurred by increasing wildfire threats, more winegrape growers in the state have bought crop insurance or are seeking higher coverage levels, Yasui said. The maximum is 85% of the production covered under the policy.

This year, the average winegrape coverage level statewide was 67% compared to 65% in 2020, he said. More growers also are opting for buy-up or additional crop insurance, which provides choices above basic catastrophic risk protection.

Unlike casualty and property policies, crop insurance rates are not based on individual claims but rather on counties, Yasui said.

“If you’re a grower and had a big loss in 2020, your rates will be the same in 2021, so you won’t lose coverage,” he said. “Crop insurance is there if you have an insurable crop. There’s been some confusion that may be tied to the limitations of property and casualty programs.”

Growers who suspect smoke-related or other losses should contact their crop insurance agents within 72 hours of learning of the issue. For suspected smoke issues, samples should be collected before harvest. Testing can be done on grapes or juice, pre-fermentation or post-fermentation.